The People of the Plague come to bring us all to our end, in service to their masters.

Although ratfolk are often associated with Hags, who are witches of the Fey, they are not prone to forging allegiances; instead are driven to inflict disease and woe upon all the world's races.  They wish to reduce all things to a state of unamicable chaos.

Known as the Mother of Rats in legend, Mathair na Francaigh is an Unseelie Noble born to Oberon from a rat who begged for his aid.  It is her lineage which allowed the Ratfolk to come into being.

Fey-made rifles in the hands of the Ratfolk. 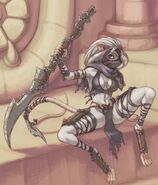 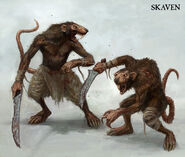 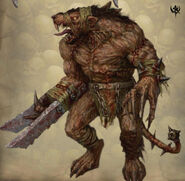 Ratfolk Ogre, imbued with greater amounts of chaos to create a more formidable beast.
Community content is available under CC-BY-SA unless otherwise noted.